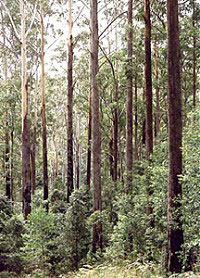 Blackbutt is one of the highest value timbers and is predominantly grown in the north coast of NSW, called the Northern Region. It is also common in coastal forests, from southern Queensland to southern NSW. Plantations are established in Australia and many overseas countries.

A tall tree of up to 40 metres or more in height, with a long straight cylindrical trunk. It can measure up to 3 metres in diameter.

Blackbutt gets its name from the rough bark at the tree base which is usually charred black from past bush fires. Blackbutt is 'half bark, which means it has rough, fibrous bark on the lower trunk with the upper trunk and branches normally being smooth and whitish to yellow in colour. The bark sheds away in strips in the upper part of the trunk, leaving smooth branches, often wtih insect 'scribbles' on the bark.

Note: The best way to identify the eucalypt species is to look around the base of the tree and discover the buds and fruits. The eucalypt flower develops into a woody capsule (fruit) after a few months. Each species has a fruit which has its own unique shape and features. The fruit is the single feature which most strongly identifies the species of eucalypt.

This is a native hardwood. The timber is light brown or yellowish. The grain is usually straight with gum veins present. It may stain well, but is a poor surface for paint and the mature wood may cause problems when gluing.

The wood is hard and strong and is the major timber used for all kinds of building construction work, including rafters and battens. It is also used for flooring, weatherboards, bridge planks, railway sleepers and pulp. When treated with a preservative it is used for posts and poles. It is highly sought after for use in making paper, particularly fine writing and printing paper. In addition, the leaves are eaten by koalas.

Where the seeds are found and how they're spread:

Back to 'Supermodels' of state forests

Back to Woodwork - select information

Back to Quick trip